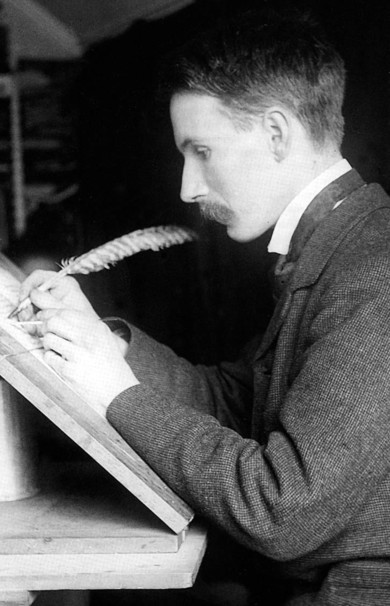 Self-taught typescript designer from the Arts and Crafts movement

We aim at readableness or making the written words easy and pleasant to read. This, then, is the scribe’s direct purpose - The making of useful things legibly beautiful.

Edward Johnston was born in Uruguay as the son of a Scottish army officer. He entered the typography industry having initially studied medicine, a field he moved away from after being inspired by the handwriting section of the British Museum in London and by William Morris and his circle of designers. In 1899, after a period of self-study and a broad range of experiments with broad-nib pens, he became an instructor of the newly established calligraphy class at the Central School of Arts and Crafts. He produced his most significant written study on typographical design – a craft he felt anyone could learn – in 1906, entitled Writing, Illuminating and Lettering. The work is considered a classic in the field.

Between 1910 and 1930, Johnston designed a number of typefaces for Count Harry Kessler’s Cranach Press in Weimar. In 1913 he was among the founders of the influential magazine The Imprint which he also edited. Through his editorial connections, Johnston was hired by the London Transport company, for whom he designed what came to be known as the Johnston's Railway type. In 1928 an edition of Hamlet was published featuring typographical designs by Johnston.