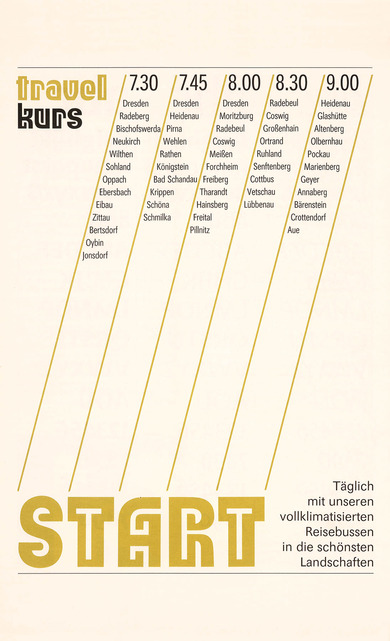 Advertisement for bus trips from the former GDR, in Kleopatra
© VEB Fachbuchverlag Leipzig

Kleopatra is a typeface by the German graphic designer Erhard Kaiser that emerged from a 1985 ideas competition for new display typefaces. Kaiser submitted seven entries to the competition and took first place with his typographic homage to the famous ancient Egyptian queen. With its fret-like forms this typeface evokes labyrinthine pathways or the ornamental armbands of classical antiquity. The most striking characteristic is the hollow spaces inserted into the bodies of the letters. The counters – i.e. the unprinted inner areas of the letters – are represented by double lines. This typeface is primarily used for commercial graphics.

Like Kaiser’s similarly structured typeface Quadro, at the time Kleopatra was digitally produced in the Publicly Owned Operation (GDR state-owned) Typoart and is now available again as part of the Typoart library in the OpenType format originally developed by Microsoft.