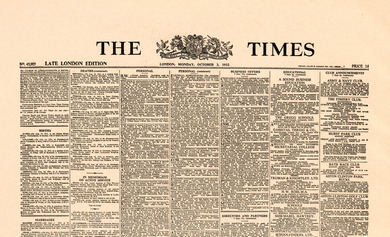 At the end of the 1920s, the British typographer and historian of printing Stanley Morison was commissioned to revise the graphic design of the world-renowned London daily newspaper The Times. In the role of artistic adviser, Morison worked together with the commercial graphic artist Victor Lardent to create a new typeface named Times New Roman, which from 3 October 1932 – exclusively for one year – came to define the new appearance of the paper. In 1934, the first book in the new typeface was published.

Initially used as a newspaper typeface, Morison and Lardent’s creation later found widespread use worldwide as a computer typeface through products by the companies Adobe, Microsoft and Apple and is now one of the most familiar and most commonly used typefaces. Times New Roman is clear, legible and economical in terms of space.