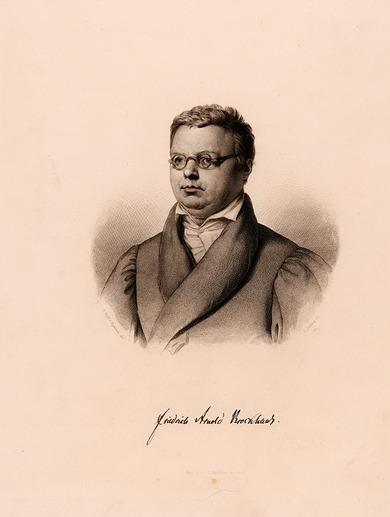 The founder of the most famous German encyclopaedia

If it were so easy to publish a large dictionary, every fool would do it.

Friedrich Arnold Brockhaus was not the inventor of the encyclopaedia, but he had such competent command of the business of publishing encyclopaedic dictionaries that he was able, initially in Altenburg and from 1817 onwards in Leipzig, to turn the Conversationslexikon mit vorzüglicher Rücksicht auf die gegenwärtigen Zeiten, acquired from Renatus Gotthelf Löbel on a visit to the Leipzig book fair in autumn 1808, into the foremost general German encyclopaedia. The Allgemeine deutsche Real-Encyclopädie enjoyed many new editions. “Der Brockhaus” became such a generic term that founder, publisher and the work itself merged into each other.

Beyond that has been lost sight of the fact that Brockhaus also published the memoirs of Giacomo Casanova in 1821, which caused quite a stir. The author’s descendants were able to sell the scandal-soaked manuscript to the French state for more than 7 million Euros in 2010.