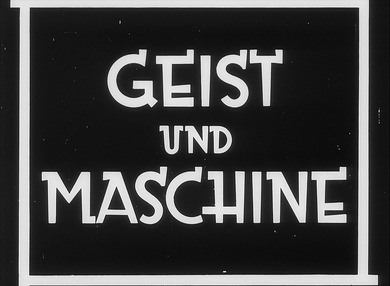 A film about the Bibliographical Institute in Leipzig, 1926

The enormous effort that is put into manufacturing the smallest book is something that is known only to a few. It is the task of the film “Geist und Maschine” (“Soul and Machine”) to spread this knowledge.

Richard Brodführer in the film script for Geist und Maschine (Soul and Machine), 1926

The film Geist und Maschine (Soul and Machine) produced in 1926 by the Döring-Film-Werken in Hannover is regarded as one of the first major attempts by a German publishing house to make use of the (competing) medium of film for advertising purposes. On the occasion of the 100th anniversary of the founding of the publishing house, Richard Brodführer who was at that time an editor at the Bibliographical Institute was commissioned by company management to write a film script for a silent film about the company’s book production unit with a particular focus on the production of Meyers Lexikon. Directed by senior engineer Dreyer and August Koch, the result was a cinema documentary some 1600 metres in length that was presented to the German censorship authorities and classified as suitable for viewing by children in August 1926.

The film was made available in two versions of differing lengths and it shows the technical processes of book production of the time with a hitherto unseen amount of detailed (moving) pictures. The film shows the work conducted in the typesetting unit, on the rotary press as well as in the galvanoplastic and book binding units. Whereas the first version was presented with an accompanying programme, the second version from 1929 was self-explanatory. In addition to advertising Meyers Lexikon, Soul and Machine was also intended to present the power of the publishing house overall and in a way the lay public could understand. The film was widely discussed in industry publications and a great deal of advertising for the film was conducted within the book branch, for example with reduced price entrance tickets for regular customers of bookshops that stocked the publishing house’s products. The film archive of the Federal Archive keeps a copy.