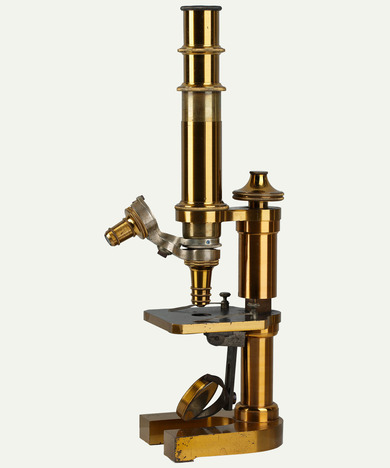 A clear view for medicine, biology and materials science: microscope by Carl Zeiss Jena, 1886. The microscope constructed by Carl Zeiss (1816-1888) with optics calculated by Ernst Abbe (1840-1905) are testimonials to the upcoming field of science and at the same time its most important working instrument.
Deutsches Buch- und Schriftmuseum der Deutschen Nationalbibliothek Leipzig, Photograph: Michael Setzpfandt

There is no patriotic art and no patriotic science. Like all good things, both belong to the whole world and can only be furthered by a general, free exchange among all contemporaries, constantly bearing in mind what has remained and is known to us from the past.

Science is the knowledge that humankind gains through systematic and methodical research and it is taught within an institutional framework in schools, colleges and universities. Scientific publications are issued by specialised publishing houses that publish the corresponding journals (Journal) and text books, among other things. Science makes up a considerable part of education and forms the basis for technology, without which production processes in factories (Factory) organised with the division of labour would be inconceivable.

From the second half of the 18th century, the development of specialised disciplines in the sciences which did not previously exist in the canon of university teachings went hand in hand with the processes of industrialisation. These included art history, anthropology, archaeology, veterinary medicine and other scientific subjects which emerged as independent areas of scientific research and teaching. The unity in science and art which had been the norm since Antiquity was now dissolved.