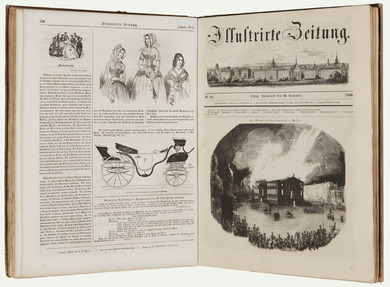 As long as the newspaper press was anonymous, it appeared as the organ of a numberless and nameless public opinion; it was the third power in the state. Through the signature of every article, a newspaper became a mere collection of literary contributions from more or less known individuals. Every article sank to the level of an advertisement.

Newspapers are printed products that appear periodically containing up-to-date information. Newspapers finance themselves by selling single issues, through subscriptions and through advertising. Newspapers depend on efficient printing methods and reasonably priced paper. They play an important communicative role in business (Businesses) and trade.

Handbills and later newspapers and magazines generally appeared since the invention of book printing with illustrations, which were first of all produced using woodcuts, and later on using wood engravings or chalcography and, in the 19th century, increasingly as lithographs. The Illustrirte Zeitung, which was published by J. J. Weber in Leipzig in 1843 was influential in setting the style for the illustrated magazine as a medium and it enjoyed a great deal of success publishing illustrations made using wood engraving and later on half-tone photography. An even greater readership was reached by the weekly Berliner Illustrirte Zeitung, which began publishing in 1892 and enjoyed print runs during the Weimar Republic of almost two million.