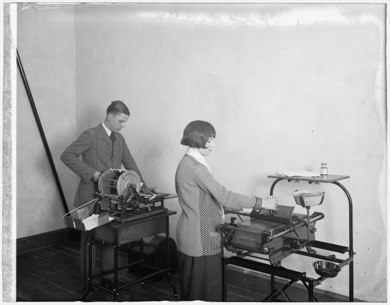 Inventor of the Multigraph machine

The Multigraph is so simple in construction, that a child can operate it after a few minutes practice, and its durability is beyond question.

From a business letter by the American Multigraph Company to the physicist Walter Lindley, 1906

Harry C. Gammeter first of all worked for a typewriter company in Kentucky. In around 1900 he constructed the prototype for a machine that generated reproductions using a rotary drum. This meant that circular letters or invoices could be generated without having to always write them from scratch. The letters were set using a kind of typewriter.

Since Gutenberg’s lifetime, the printing process had required great technical and organisational efforts. The metal letters were stored ready for typesetting in cupboards that weighed tons kept in specially equipped printing workshops (Offizin) and the wooden and later iron printing presses were operated only by trained printers. A construction from the USA ultimately made it possible to use the printing process for one-sided texts with a small print run as well. Harry C. Gammeter revolutionised communication in the business world with his Multigraph duplicating machine. Gammeter was one of the founders of the American Multigraph Company, which built and marketed the machine.