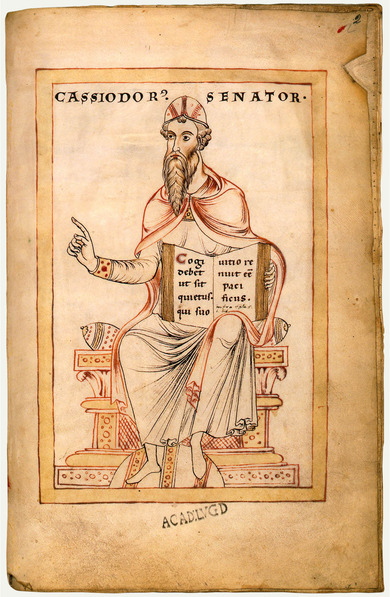 Happy effort, laudable industry, to preach to men with the hand, to let loose tongues with the fingers, silently to give salvation to mortals, and to fight with pen and ink against the illicit wiles of the Evil One.

The Roman statesman, scholar and writer Cassiodorus contributed greatly to the preservation and transmission of the written and educational lore of antiquity to the Latin-speaking Occident. As the son of a prosperous family of senators he served as an official in the royal household of the Ostrogoth king, Theoderic at just 17. After withdrawing from his political career path, in 554 he established the Vivarium monastery on property inherited from his father in Calabria (southern Italy). Here he devoted himself to philosophical studies, translated writings of antiquity from Greek to Latin and wrote numerous works of his own.

With his work Institutiones divinarum he offered an overview of the literature of antiquity and made it the monks’ work to carefully copy religious texts but also, in particular, profane texts. He had these transcriptions and their originals archived, and they composed the first medieval library. With this Cassiodorus laid the foundation for the role of Occidental monasteries as educational institutions.