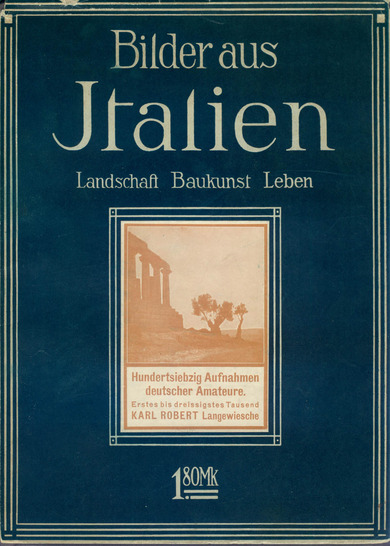 A pioneering success by publishing house Karl Robert Langewiesche, from 1909

From the very beginning, the blue dust jacket was the visual identifier for the books issued by Dusseldorf publisher Karl Robert Langewiesche, established in 1902. The focus of the range was, in the words of founder Karl Robert Langewiesche (1874-1931), “quality mass-produced articles at low prices”, “so that my work may serve the broad masses, the very ones described as uneducated”. In 1908 the term The Blue Books was used for the first time in advertising brochures. The first volume under the new brand name, the publication Bilder aus Italien (Images from Italy), appeared in 1909 and by 1912 had sold 75,000 copies in three editions. The inclusion of advertising in the inside covers was then a novelty, with graphic artist Karl Köster (1883-1975) responsible for the overall design until 1958. The publishing house moved to Königstein im Taunus in 1913, and in 1927 Langewiesche established the even cheaper range Der Eiserne Hammer (The Iron Hammer) in red dust jackets.

The Blue Books enjoyed a wide readership until around 1960, particularly among the educated middle class; between 1933 and 1945 there was an increase in works reflecting Nazi views. Since 1960 the publisher’s thematic focus has been on art and related areas such as architecture, design, photography and art history.