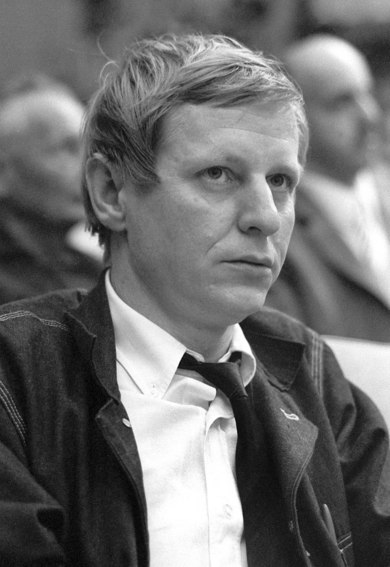 The zero position is the actual strength, rather than the weakness of television. It is its use value. The viewer switches the appliance on in order to turn off.

From the 1950s onwards, Hans Magnus Enzensberger, who came to prominence as a poet, also made a name for himself as a left-leaning critic of the conservative Adenauer republic. It was not only literary publications such as verteidigung der wölfe (Defending the Wolves) from 1957, but also his wide-ranging journalism that had a significant influence on intellectual and art theory debate, for example his editorship of the quarterly cultural periodical Kursbuch (1965-1975) or the bibliophile book series Die andere Bibliothek (The Other Library) (1985-2004).

Enzensberger was a particularly noted media critic, especially as a result of his two publications Baukasten zu einer Theorie der Medien (Construction Kit for a Theory of Media) from 1970 and Das Nullmedium oder Warum alle Klagen über das Fernsehen gegenstandslos sind (The Zero Medium or Why All Complaints About Television are Pointless) from 1988. He examined the culture industry and its orientation towards consumerism, stupefaction and social torpor, as it was described in Max Horkheimer’s and Theodor W. Adorno’s Dialektik der Aufklärung (Dialectic of Enlightenment) from 1947, and he challenged it – very much in the tradition of Bertolt Brecht – to provide media usage that was more democratically determined. His central demands included decentralised programmes, possibilities of interaction for the users and self-organisation beyond the auspices of the authorities. Enzensberger designated television a “zero medium” as it prevented communication by broadcasting pleasant but meaningless banalities.