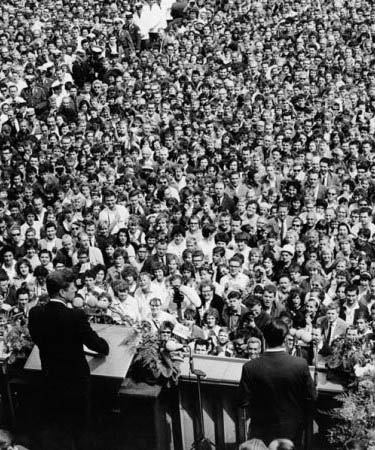 The crowd will always turn towards those who talk of absolute truths, and will scorn the others.

The concept of the era of mass media is rooted in the concept that there is a nameless mass to which one should appeal to through communicative means. Theoretical use of the term began in the 19th century. Along with literary reflections of modern metropolitan life like Edgar Allan Poe’s The Man in the Crowd (1837), it was above all the two sociologists Ferdinand Tönnies (Community and Society, 1887) and Gustave Le Bon (Psychology of the Masses, 1895) who provided the essential works on the characteristics and dynamics of large groups of people and so established modern crowd psychology. The totalitarian regimes of the 20th century paid particular attention to their findings, using them as a starting point for wide-ranging propaganda in the form of new media such as broadcasting and film. In 1939 France’s Maurice Halbwachs introduced the idea of a collective memory which forms the basis of interpersonal relations.

The mass media age reached its peak after the War and since then new technological developments have encouraged specific usage by individual target media groups. In a now-classic definition of mass communications, German media scientist Gerhard Maletzke spoke of the so-called dispersed audience which constitutes itself anew from case to case and whose members have no relationship with each other.