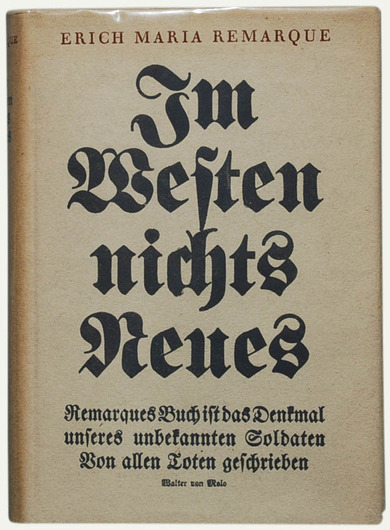 Jacket front of the novel All Quiet on the Western Front by Erich Maria Remarque from 1929
Antiquariat Dr. Haack, Leipzig

A pacifist bestseller about the First World War, 1928

It’s not a diary, it’s not a novel, it is the experience that shattered a generation …

The first parts of the text of Erich Maria Remarque’s novel All Quiet on the Western Front were published in the Vossische Zeitung in 1928. The publishing house started a major marketing campaign, which proved to be hugely successful: when it was published as a book at the start of 1929, it had already been ordered 30,000 times. It has now sold over 20 million copies and is today one of the most successful and well-known German books of all times. In the novel, Remarque tells the story of Paul Bäumer, a young man who, along with his classmates, volunteers for duty at the front in the First World War. The protagonist first sees his friends die before he himself dies towards the end of the War.

In the year it was published, the Propyläen publishing house printed a run of 1,000 copies in Braille. The edition was dedicated to the numerous Germans blinded during the war and was distributed free-of-charge. Remarque’s work has been translated 50 times. The early talking picture adaptation by Lewis Milestone in 1930 is regarded as a classic anti-war film. It was awarded two Oscars in the categories for best film and best direction. The film was banned in many countries (including Nazi Germany) due to its pacifist message.