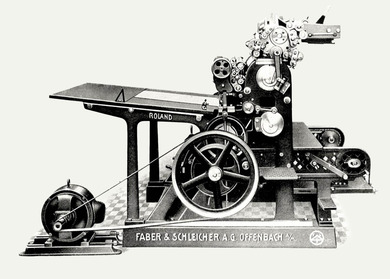 The image shows the first offset machine according to the construction principle still used today: the Roland, a product by the Offenbach company Faber & Schleicher.
Historisches Archiv der MAN Augsburg

Reproductions for everyday use

Until the end of the 18th century, only two procedures were used in Europe for creating print products. Alongside relief printing as a traditional book printing technique based on raised letters, intaglio developed from the artistic precursors copper engraving, etching and photoengraving. With the invention of lithography by Alois Senefelder in 1796, planographic printing, which was based on the chemical contrast between fat and water, became popular in the 19th century. From 1904, the process was widely used in the book, newspaper, advertising and packaging industry as it developed into offset printing. Around the same time, conventional manual typesetting in use since the days of Gutenberg became mechanised with typesetting machines such as the Monotype and Linotype. Phototypesetting in everyday use since the 1960s was replaced around two decades later with digital desktop publishing on the PC.

After the invention of the photocopier (1938) and ink jet (1951) or laser printing (1969) revolutionised the reproduction of documents in the business and private sphere, digital printing, introduced in 1993, now facilitates the cheap production of on-demand publications and customised products such as photo albums, calendars and greeting cards.