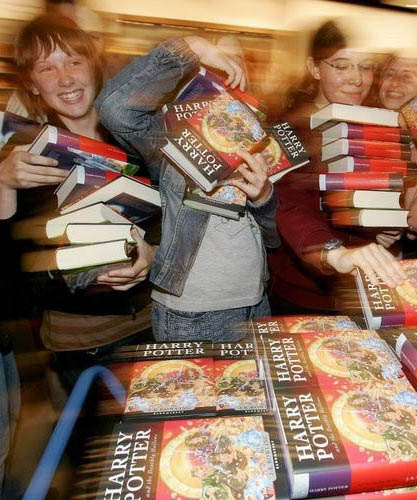 With her series of novels about the magician Harry Potter, British author J.K. Rowling scored a phenomenal bestseller success. The seventh and last part was published in 2007 and – like its prequels – eagerly awaited.
picture-alliance / dpa

From the Bible to Harry Potter

Bestsellers are often the starting point for a whole range of additional products. A wealth of accompanying merchandising products contributed to the cross-media success of literary blockbusters such as J.K. Rowling's Harry Potter series with its eponymous young magician. The seven novels have been translated into 67 languages so far, and also adapted into films, audio books and computer games. However, the undisputed champion among the bestsellers is the Bible, which has been sold since its 42-line printing by Johannes Gutenberg (1552-1554) in almost unimaginably large print runs over the centuries and is thus the most printed, widespread and translated book in the world. Silver and bronze medals in the ranking go to Quotations from Chairman Mao Tse-tung and the Communist Manifesto by Karl Marx and Friedrich Engels, which sold an estimated 500 million copies following its first publication in 1848.

Successful bestsellers often lead to a wealth of literary imitators who not only copy the famous original in terms of its contents, but also its format – the cover design, for example. In addition to traditional advertising, digital word-of-mouth advertising – for instance in the form of reader reviews on online portals – now play a critical role in successful sales today.