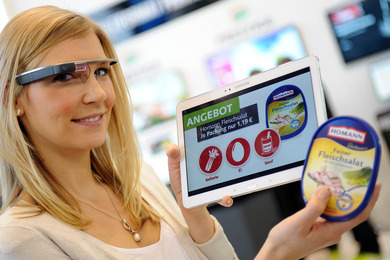 Glasses as digital scanners and data storage devices: gadgets like Google Glass bring together great fears and great hopes. Are they tools to make everyday life easier, or omnipresent instruments for advertising and surveillance?
dpa

Our failing brains can be replaced bit by bit with superior electronic equivalents that will make our personalities and thoughts clearer than ever, even when no trace is left of our original bodies or brains after a certain period.

The relationship between humans and machines is growing closer and closer. Computers are becoming a fixture not only of our everyday lives, but of our very bodies. Mini-computers on the body can register emotions, communicate with users and connect with them. Gadgets for the virtual enhancement of reality such as Google Glass, the high-tech eyeglasses, suggest at where this journey might be heading. The device can be used to take photos within the blink of an eye, project a laser keyboard onto the palm of one's hand and identify other people automatically using facial recognition. In January 2014, Google announced further plans to introduce electronic contact lenses to measure diabetics' blood sugar levels and send alarms via an app to their smartphones. These artificial tools, created by humans to compensate for their bodies' deficiencies, are poised at the threshold to a new virtual era.

In 1893, the British science fiction writer H.G. Wells drew a striking picture of the Man of the Year Million to accompany an essay by the same title. He claimed that the body parts that enabled humans' dominant position over nature – their hands and their brains – would continue to develop, while those inherited from their animal ancestors would wither away. Today, media technology has already become a kind of extended human nervous system, as Marshall McLuhan described it in his book Understanding Media back in 1964. Humans in the media society are connected to information systems that make them permanent consumers of an all-encompassing, nonstop stream of media information.