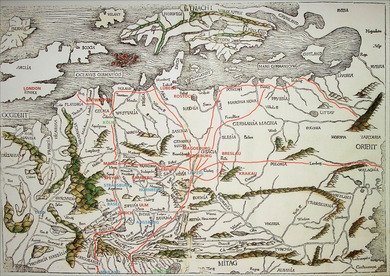 Forty years after the Gutenberg Bible, printing finally asserted itself on the market against the competition of all of the older methods of disseminating written text. Nearly anyone who was interested could now get a hold of reading and illustrated material at trade fairs and markets, or from printers and wandering peddlers.

After printing technology had initially been kept secret by Johannes Gutenberg and Johannes Fust, this innovation began to spread in the German language territories from 1460 inwards. After Mainz, where Gutenberg was based, Bamberg, Strasbourg, Cologne and other sites in southern Germany and Italy followed suit. A great number of German printers began travelling and spread their knowledge of the new technology throughout the whole of Central Europe. Besides the Church’s centres of power and university cities, trading sites and Hanseatic cities were also among the early centres of printing. The extension of transport and distribution networks was a basic prerequisite for the sale of the new mass product “book”. The old trade routes – in particular the Via Regia and the Via Imperii – were of great significance for the spread of printing and for book trading.

By 1500 printing offizins had emerged at around 250 locations, some of which specialised in certain literary groups. The number of books published in this period is estimated to be about 27,000 and the total number of printed units produced has been put at about 17 million. This enormous transfer of technology and cultural advance also continued worldwide in the following centuries, dependent on the economic and political situation in the individual regions.