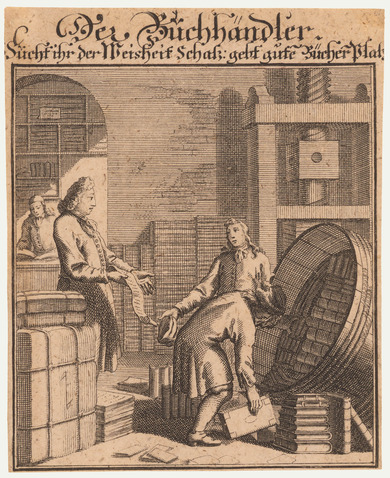 After the invention of printing with movable type and, with that, the possibility of mass producing identical copies of a printed work, the book medium developed into a major trading commodity in Europe. Trade fairs began to feature printed works alongside their more customary goods. The delivery of printed works in quires without binding meant that easily movable book tubs could be used to transport them. Transporting books in bales also became popular. In 1564 the Frankfurt (on the Main) book fair was established and it quickly became the focal point of the European book trade. The city of Leipzig also gained importance as a book trading location so that ultimately, in the second half of the 18th century, the majority of booksellers concentrated solely on that city’s book fair. Term catalogues listed the works that were on sale, serving as a forerunner to contemporary national bibliographies.

Between fairs, printed goods were kept in storage by the exhibiting book dealers. This led to the development of the so-called “Kommissionsbuchhandel”, or commissioned book trade, an intermediate service industry providing book publishing or distribution services which served as a link between publishers and retail booksellers. This was also accompanied by the colportage or “book peddling” trade. One unique aspect of the book trade is that the value of a work’s intellectual copyright is traded in conjunction with its physical form. This meant that there efforts almost from the outset to provide legal protection against unauthorised reprinting and to allow the originator of the work an appropriate share of the profits. Countries such as Germany and Austria have stipulations that provide for a binding book price, based on the idea that books are not only tradable objects but also items of cultural significance that require copyright protection.