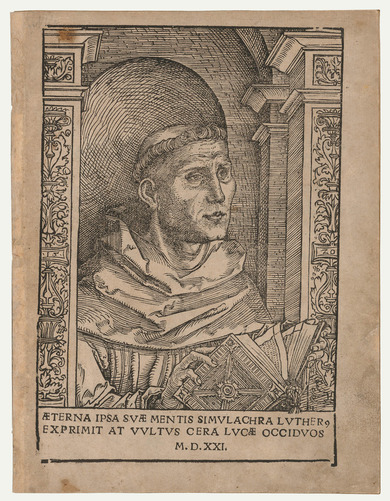 The art of book printing is the last and greatest gift because it is through this (gift) that the question of the (one) true religion will become known to the entire world – to the very ends of the earth and in all languages – in accordance with God’s will. It is the inextinguishable flame of the world.

Printing was as important for the Reformation as the internet is today for the dissemination of revolutionary ideas. Martin Luther was the first person to make extensive use of the medium of popular prints in order to spread his ideas of a true Christianity. His central thesis maintained that the righteousness of God was only accessible through faith. The Papacy, the sale of indulgences, penance, Latin ordinances and the celibacy of priests were harshly criticized and rejected. The Counter-Reformation, in turn, responded with the distribution of polemic flyers.

The 1521 Edict of Worms saw Luther excommunicated but with the help of Frederick the Wise he was able to further expand on his life’s work – initially while interned in Wartburg Castle. It was here that Luther translated the New Testament into German and by 1534 an Old Testament translation was also complete. The Luther Bible is today still the most popular of all biblical translations, having exerted immeasurable influence on the development of the German language. In 1522 Luther took residence in Wittenberg. His preaching was legendary, as was the hospitality of his home, run by his wife Katharina.