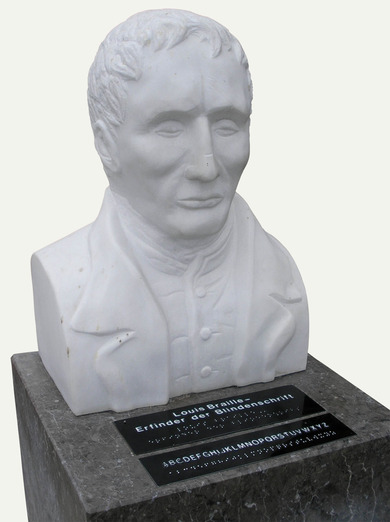 (…) we, the blind, are just as grateful to Louis Braille as the whole of humanity is to Gutenberg.

Helen Keller in speech on the 100th anniversary of Louis Braille’s death, 1952

In 1820, the eleven-year-old Louis Braille learned the system of so-called night writing for the first time. It was one of the first ever embossed type systems of writing and was invented by Charles Barbier, a Captain in the French army, and Braille immediately understood its potential. Louis, who had become blind as the result of an accident with a saddling tool at the age of three, was dissatisfied with the limited options the blind had if they wanted to learn reading and writing. Of above-average intelligence and interested in matters of science, he searched for a practicable and uniform means of alphabetisation for the blind. Based on Barbier’s idea of transferring characters into a tactile alphabet, at the mere age of 16, Braille developed a system using six dots that was easy to understand through touch. It was named after him, becoming known as Braille writing. Other additions were made to the basic system, such as a special musical script for blind musicians, something that was very important to Braille himself, a a highly talented musician who not only worked as a teacher at the world’s first ever institute for the blind in Paris, but also performed as an organist.

When Louis Braille died of tuberculosis in 1853, the form of writing using six raised dots that he had developed was already officially recognised in France, but he did not live long enough to see its worldwide triumph. Today, Braille is the internationally best-known form of writing for the blind and is used in almost every country in the world in forms adapted to the respective languages. Apart from the basic alphabet for normal writing uses, there are also Braille scripts for special subject matters, for example, a Braille chess script and even a Braille knitting script.