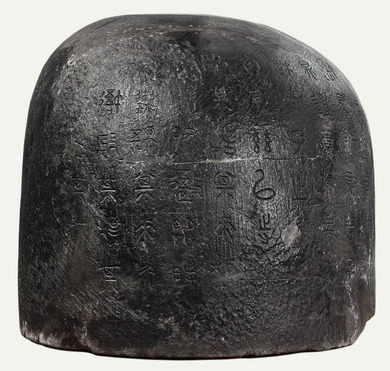 It was written in stone so that one bequeathed the deeds to a thousand generations, and when breaking out the stone for the drums, not even the steepest mountain was spared.

These ten granite stones, weighing approximately 400 kilograms each, are referred to as “stone drums” due to the similarity to Chinese-style percussion instruments. They carry the oldest known Chinese stone inscriptions and are today housed in Beijing’s Palace Museum. These poetic texts, which describe hunting and fishing practices, are probably around 2,800 years old. Stone copies and dabbings of these scripts were produced soon after the originals. As part of the dabbing process, soaked paper was placed on the stone and then brushed with China ink – the symbols of the script thus stand out in white against a black background.