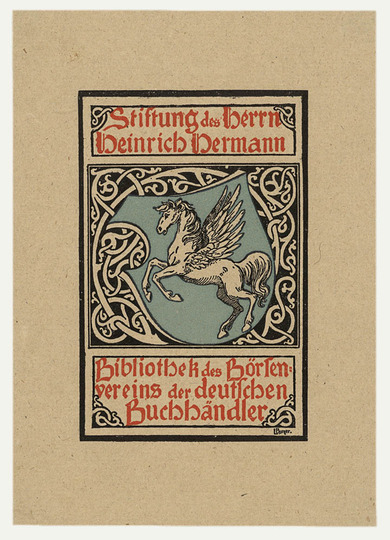 Until the introduction of industrialised mass printing in the 19th century, a book was, beyond its intellectual content, also a valuable object in its own right. Since the advent of the printing press with movable type invented by Johannes Gutenberg this dual prestige function had been recognised by book owners by noting the name of the owner in the printed works. This custom, in turn, led to the still-practised tradition of the bookplate or ex-libris (Latin = “from the books”). The form experienced a renaissance and the zenith of its popularity towards the end of the 19th century through artistically ambitious Art nouveau designs such as those by the painter and graphic artist Max Klinger. In most cases, bookplates are small, decorative labels that leave space for personal entries.

Bookplates are sought-after collector's objects among bibliophiles. Popular designs exist from such important artists as Albrecht Dürer, Lucas Cranach the Elder and Hans Holbein the Younger. The German bookplate society Deutsche Exlibris-Gesellschaft e.V. was founded in Berlin in 1891 and still exists today.