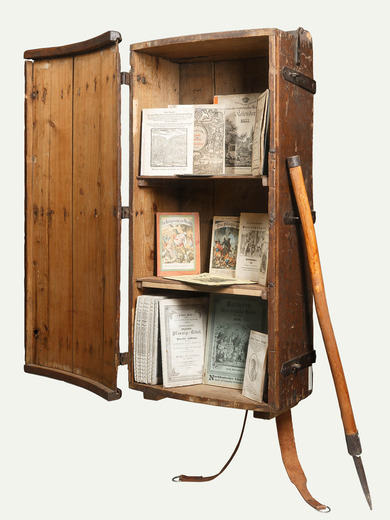 The mobile bookshop of the pre-industrial age

“Krätze” is a Southern German term for a lockable, wooden storage case. Colporteurs (book peddlers) carried these on their backs, so as to transport epinal prints, religious tracts, calendars, entertainment magazines and other printed writings around the country. For the rural inhabitants of the 18th and 19th centuries, colporteurs were the most important suppliers of literature and news. Two hooks on the upper edge of the “Krätze” also allowed for the presentation of groceries, which peddlers often stocked alongside their literary selection. A knotty walking stick could be inserted into a ring on the lower edge to afford the carrier, and his back, a much needed break. The “Krätze” cases sometimes also featured secret compartments for storing controversial literary works.

Over the course of the 19th century, the majority of the residents of the Württemberg town of Eningen, where this case is housed, made their living from the colportage (book peddling) trade.